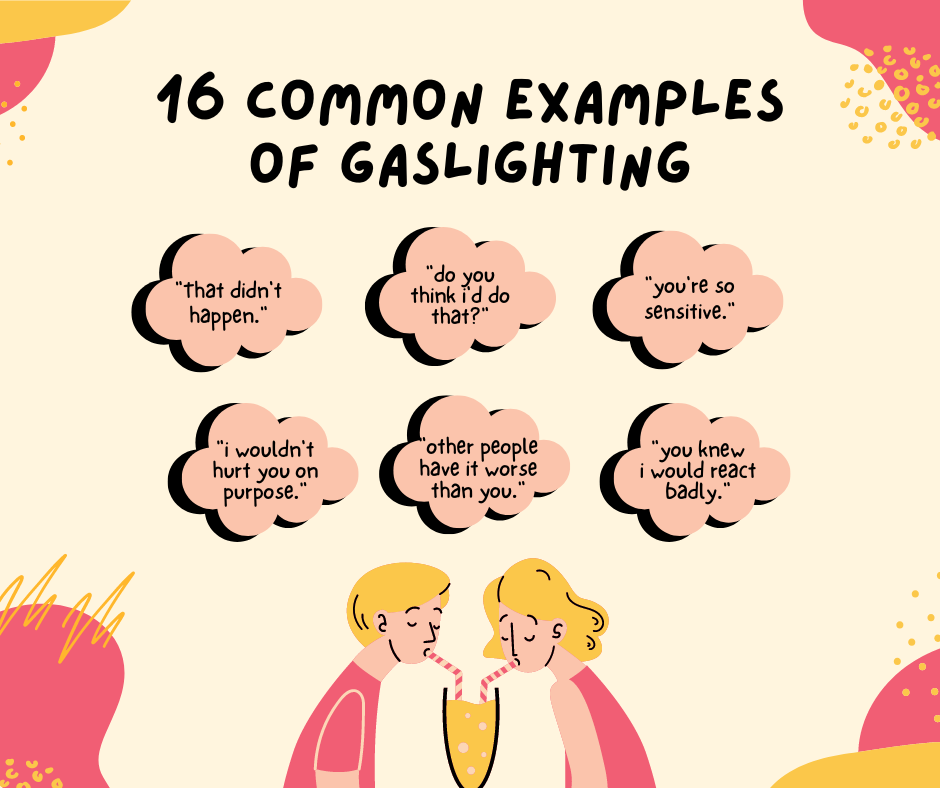 Gaslighting is 2022’s word of the year. Unfortunately, this is not a cause for celebration. A hallmark of abusive relationships, gaslighting can contribute to mental and emotional abuse for victims. If you think you’re in a toxic relationship in your life with lots of gaslighting, make sure to recognize the red flags with these common examples here:

One of the most common examples of gaslighting is making the victim feel like they’re imagining things. Gaslighters will do bad things to you and then turn around and act innocent when you call them out for it. Your sense of reality becomes skewed until you start thinking that this pushing and pulling is normal in a relationship.

2. “I Think You’re Crazy or Wrong, and Other People Think So Too.”

Gaslighters will go to the ends of the earth to make you think you’re crazy. They’ll tell your family and friends distorted stories about you to make them think you’re crazy too. This makes you feel more isolated since everyone you trust doesn’t believe in you.

This seems like an apology, but it really isn’t. They’re not apologizing for doing something bad; they’re apologizing for you for feeling bad. It’s like them running over your dog and saying sorry that you feel so bad about your dog dying.

Confronting a gaslighter is easier said than done. If you tell them about the things they’ve been doing, they can just feign ignorance and convince you you’re imagining things. So, not only are they making you doubt reality, but they’re also manipulating your trust in them.

5. “I Don’t Know What You’re Talking About, You’re Not Making Any Sense!”

This is intended to make a person feel stupid about their feelings. They make you go on and on and on about why you feel upset, but instead of listening to you, they shoot you down and act like you’re crazy.

This is a way for gaslighters to deflect responsibility on their part. Instead, they put the blame all on you for feeling what you feel and make you question yourself. This is also a precedent for future things—next time they do something bad, you’ll already think they didn’t do it on purpose to hurt you.

Gaslighters always want you to think they care about you. When they do awful things to you but associate them with love, you start feeling guilty about feeling angry or sad because it’s how they show love.

For example, tiger parents yell and belittle their children for not doing well at school. Then when the kids start pushing back, the tiger parents just say they’re doing it because they love them and want them to succeed in life.

This is classic gaslighting behavior. It implies that nothing they do is ever hurtful—you’re just too sensitive and easily offended by it. Eventually, you stop standing up for yourself because every negative feeling you have is a figment of your imagination.

10. “That’s False Info You Found on the Internet, That’s Not What This Is.”

The great thing about the Internet is that now mental abuse victims can look for resources to help them. Many of these resources are written by medical experts and should not be dismissed as false information on the web. If outside sources agree that you’re being abused, then you probably are.

Just because people have worse living conditions or relationships than you doesn’t mean your feelings aren’t valid. This undermines your feelings and makes you feel bad for feeling negative when it’s totally understandable.

If there’s anyone in this world that knows more about your feelings than anybody else, it’s you. Never let a gaslighter dictate what you should feel because your feelings are your own. For example, if you’re angry with someone and they try to tell you it’s your pre-menstrual syndrome acting up, don’t back down if you’re super sure you’re angry. These are common examples of gaslighting that make you think you don’t know anything.

Gaslighters feign concern when they want to gain your trust. Then, when they’ve got you hooked, they start making you doubt reality. You readily believe them because they’re a trusted person who you’re sure would never hurt you.

Everybody has memory lapses once in a while, but you should never let a gaslighter make you doubt your memory too much. Cede to them too much and they’ll quickly take control over you. They can make you think you did or didn’t do this, said or didn’t say that, and much more.

15. “Are You Sure You Didn’t Get Something from Me? Did You Double Check?”

This usually happens when you’re waiting for something from a coworker but didn’t get it because they had forgotten. They then blame you for their oversight by making you think you missed it.

For example, you needed to attend a very important meeting. However, a coworker didn’t tell you about the meeting and didn’t send you an invite either. When you miss the meeting and confront the coworker about it, they’ll say, “No, I definitely informed you and sent you an invite. Maybe it’s in your spam folder and you didn’t check.”

16. “I’m Sorry You Can’t Handle All This Responsibility.”

This might sound like a concern, but it’s actually a backhanded comment. It implies that you’re not good at handling stress and makes you think you need to push yourself more. They’re common examples of gaslighting that attack your skills!

This comment is especially bad if your workload really is stressful in general. Your coworker or boss just expects too much from you and wants to wear you down.

What You Should Know About Dating as a Single Mom

7 Symptoms of a Toxic Relationship

Getting Married a Second Time? Read This.