5 Things That Can Help Calm Anxious Pets Down 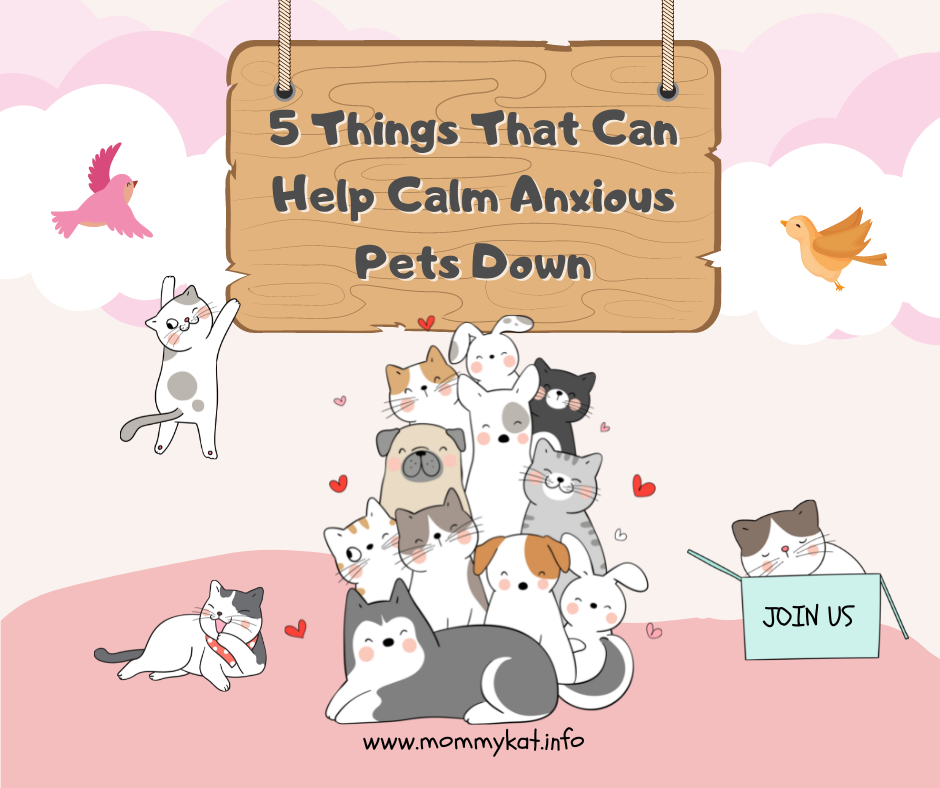 Like humans, anxious pets can suffer from trauma due to abandonment, abuse, unloving environments, and more. Despite being rehomed into your loving arms, they might still suffer from anxiety. This can be painful for both the pet and the pet owner. You want to tell them everything will be okay, but you’re just not sure how.

The pet, on the other hand, might develop undesirable behaviors like whining, scratching, barking, peeing, and chewing. They will likely also be scared of strangers and might even be a danger to them. These behaviors should not be encouraged either!

This article will talk of several ways you can manage, or even completely cure, your pet’s anxiety. Anxious pet owners need to get their condition managed so their pets, and thus owners, can live happy and healthy lives.

1. Give Them Lots of Exercise

Exercise also releases happy hormones in their furry bodies. The more physically active they are, the more mentally sound they are. It’s good for their mental health and their physical health.

Exercise is also a way for you to spend quality time with your pets. You can spend an hour or two at the park throwing balls or frisbees for your dog to catch. You can also spend the day with your cat dangling a feather toy or teasing them with a laser pointer. Anything that’ll keep them moving!

2. Give Lots of Physical Affection

Sometimes all the comfort we need is in the hands of someone we love. Hugs, kisses, caresses, cuddles, and other forms of physical affection have an innate ability to soothe. So, the next time you see your furry friend feeling a bit shaky, be there for them physically. Even a pat on a dog’s head or a scritch under a cat’s chin can make them feel loads better.

However, please remember not to force any physical contact. Some animals don’t like to be touched when they’re feeling vulnerable, especially if they’ve been victims of abuse before. You can offer physical affection by offering a hand to sniff, but leave it for them to decide if they want a touch.

3. Give Them Some Space

As we just mentioned, sometimes animals don’t like being touched when they’re in a mood. If your pet is one of these animals, then consider giving them a safe spot for them to escape to. This safe spot can be as simple as a crate with pillows and their favorite toys, or as luxurious as a whole room filled with classical music, low lights, and aromatherapy. This isn’t a time-out—this is pampering time!

Just remember to make it easily accessible for them. You don’t want to lock them in there, and you also want to make it easier for them to have alone time.

4. Put Some Clothes on Them

Clothes do more than just make your pets look cool and stylish. They also wrap themselves around your pets, making them feel safe and secure.

Indeed, this is the very reason many cats love to squeeze themselves into the tightest spaces like boxes and pots. They love being in snug spaces! Additionally, one of the best ways to calm an anxious dog during fireworks is by wrapping its body strategically in bandages. Try it out for yourself and see the wonderful difference it makes!

5. Try the Best CBD Oil for Dogs and Cats

Cannabinoids are compounds found in the cannabis plant. They bind to receptors in the endocannabinoid system that helps regulate sleep, mood, appetite, and many others. They alter the effects of this system. Cannabinoids change how the cells in the system interact with each other and react to messages released by the brain.

You’ve probably already heard of cannabinoids in the form of marijuana or weed before. They’re full of tetrahydrocannabinol (THC) that gives you that high, euphoric feeling. They also contain trace amounts of CBD (cannabidiol) that have a similar structure to THC but don’t induce that high. Both compounds can help manage pain, mood, and sleep.

CBD is an essential element of many medications on the market but has recently made its way to the pet world too. CBD oil for dogs and cats such as ones from All Paws Essentials have recently become popular as they help ease anxiety symptoms. One drop of the oil directly into the pets’ mouths or into their food can make a massive behavior change. It’s completely safe and vet-approved!

So, why not buy a bottle for yourself and see how it works for you and your pet? CBD is also available in treat form!

The Benefits of CBD Dog Treats